This is the second article of the “Tactical guide” of Daimyo (get the first article right here). In this one, i’ll write about the main mechanism of Daimyo: dice drafting.

Reminder: Daimyo is designed by Jérémy Ducret, illustrated by Dimitri Chappuis and Anthony Wolff and published by La Boite de jeu. Daimyo is a game of Dice Drafting, Majority of Influence and Resources Management.

Many years after a disaster that decimated most of mankind, some survivors, organized in clans, started a new civilization based on a misinterpretation of the Bushido codes. In this uchrony, combining lost technology and waste materials, you play as a so-called Daimyo who craves to be the new Emperor of the Archipelago of 6. Popularity has replaced honor and every Clan aims to become the most popular to rule the Archipelago.

Daimyo will be launched on Kickstarter from the 16th of July to the 30th of July 2020.

At the beginning of each round, from 7 to 13 dice will be rolled, depending on the number of players. Each player will then draft the dice one by one from the common reserve to activate actions on their player boards. When every player has picked 3 dice, the round ends.

There are 3 colors of die: blue, red and green. Each color is associated with specific actions. The colored areas on the Clan board (see above) define the color of the dice that can be placed on each area.

During the draft, you’ll choose a die and its color depending on the actions you need to do. Yet, the dice value also plays a crucial part…

A value to rule them all…

First, if the total value of the 3 dice placed on your player board at the end of a round equals 13 or more, it triggers your Clan ability. Every Clan has its own special power. These abilities will bring a boost your development!

…and in Hero cards, bind them!

But first and foremost, the dice values will be used to activate Hero cards. In addition to the main actions of your player board, you’ll be able to use the abilities of the 36 unique Heroes of the game.

The card system is based on a light deckbuilding mechanism. When playing a Hero card, it goes to your discard pile. Your discard pile will be shuffled to form a new deck of cards when you have to draw a card and your deck is empty.

Every Clan begins the game with 3 unique starting Hero cards (you can see the Techno Clan cards here above). Then, during the game, players will buy new Hero cards and add them to their hands.

To play a Hero card, you have to exactly reach its activation number thanks to the value of one or more of the dice placed on your Clan board. Actually, if your Hero can be activated with a 10, you could play it with 2 dice of value 6 + 4, or even with 3 dice of value 3 + 2 + 5 for example. You can use a die that already has been used to activate a Hero card on a previous turn. Consequently, you’ll have to carefully draft your dice for their value, in addition to their color, in order to optimize your actions with the help from Heroes. 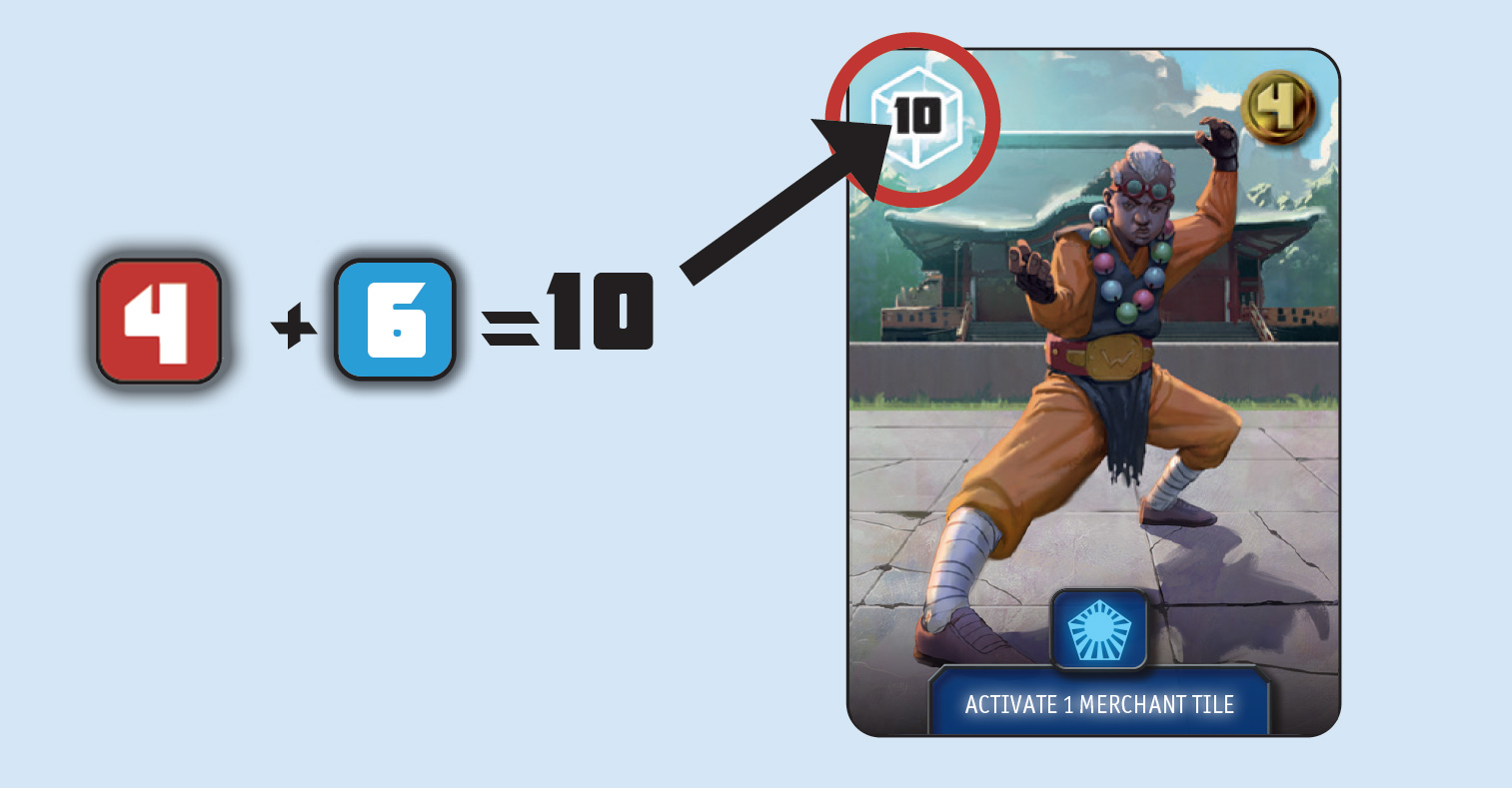 When playing Daimyo, the dice drafting will be key. If you manage to draft the right color and value of die at the right time, you’ll get the upper hand over your opponents in the fight to become the new Emperor of the Archipel of 6.

[Tactical Guide – part 2] Daimyo, the dice drafting
We use cookies on our website to give you the most relevant experience by remembering your preferences and repeat visits. By clicking “Accept All”, you consent to the use of ALL the cookies. However, you may visit "Cookie Settings" to provide a controlled consent.
Cookie SettingsAccept All
Manage consent