It’s a Wonderful World will be our 5th Kickstarter project and will be launched on the 14th of May 2019. A game designed by Frédéric Guérard, illustrated by Anthony Wolff, and published by La Boite de Jeu and Origames. A 1 to 5 player game that plays around 45 minutes.

In my first article (here) i introduced the gameplay basics of “It’s a Wonderful World”. Today I will write about the “Heritage Campaigns”, what they bring to the game and how we developed it.

In a game with pure and streamlined mechanisms like “It’s a Wonderful World”, it may be surprising to talk about “Campaigns”. This word is usually more suited to Ameritrash games and other games with strong themes and narrative aspects.
Yet, that’s without a doubt the best word to present you the 2 Campaigns that Frédéric Guérard and I developed.

By working on « It’s a Wonderful World », we had many gameplay ideas. We experimented with lots of variants. Some were working but were repetitive. Others were too harsh for beginners, too complex, etc…
I then realized that the game was an amazing creation sandbox. Supported by a theme that goes from the pop culture to the pulp literature, with metaphor of our actual culture or politics, this was the fertile ground to tell a million things.

Example of Pulp litterature covers. We got rid of all the bad taste Nazi/Bimbo/Dinosaur things but kept the Pulp/uchronia feeling for the theme of the game, especially with the Discovery cards.

Then, one day i created 3 linked scenarios and showed it to Frédéric. We immediately agreed that the “Heritage Campaigns” were belonging to our project.

Some cards of the 1st prototype of the campaign

Yet, we didn’t see the Campaign mode as a commercial pretext. It had to bring something substantial to the game. I really wanted it to be more than simple expansions.
I am personally a big fan of campaign or Legacy games (but only when it’s well designed, as Pandemy Legacy) but I rarely have the time to finish them.
Thus, starting from this premise we set ourselves some criteria:

– Once finished, the Campaign must leave a trace in the base game. That must not be a “one shot” thing; we must keep the heritage of the Campaign games we played.

– Everything must be re-playable, without components destruction or definitive deterioration.

Yet, how to name these campaigns? That’s Legacy as the initial meaning of this word “to leave a trace, a heritage” in your game. But nowadays this word is associated to games in which you destroy components (which is great in Pandemic Legacy for instance), and that doesn’t fit perfectly well with our project. The word could disappoint those who are seeking this definition of Legacy in a board game, and could frighten those who dislike it.

So far I’m using the terms Semi-legacy, Heritage, progressive Campaign… but the best thing to do is to explain how it works.

Each Campaign is divided into 6 or 7 scenarios. You start with the first one and follow the instructions. Each scenario tells a specific story, a part of the game’s universe, and there is always a story bifurcation at some time so you won’t play all the scenarios during the same campaign. You could then replay the same campaign to try the other “path”.

Each scenario tells a story (following the story of the previous scenario, or linked to the Campaign’s theme). For instance, the first scenario of the Campaign called “War and Peace” tells how the Empires, 10 years after the Great Wars, are trying to unite within a huge organization for global peace known as “PAX-10”.

The first 3 pages of the 1st Campaing rulebook. The first scenario is quite simple and introduce this mode. I concealed the scenario’s result to avoid any spoil.

This scenario also adds a mini-rule, an evolution for the game to come and a new project card to build cooperatively.

The game then plays a usual. At the end, following the collective choices made during the game (here, building PAX-10 or not) and following the Winner / Losers and the individual choices, everybody wins some advantages (always positive bonuses).
The Empires’ decisions impact the next games in various ways. You will all start the second scenario differently; and this scenario will also bring its proper story, rules and choices.

I won’t reveal more details as there is a real pleasure to discover the Campaign progressively.

At the end of the Campaign, when the last scenario is over, players will obtain a sealed Heritage Booster as a reward. It contains unique cards that will add to your base game and enhance it. The cards remind the decisive points of the Campaign story and bring some new powers also related to the scenarios you’ve just played. 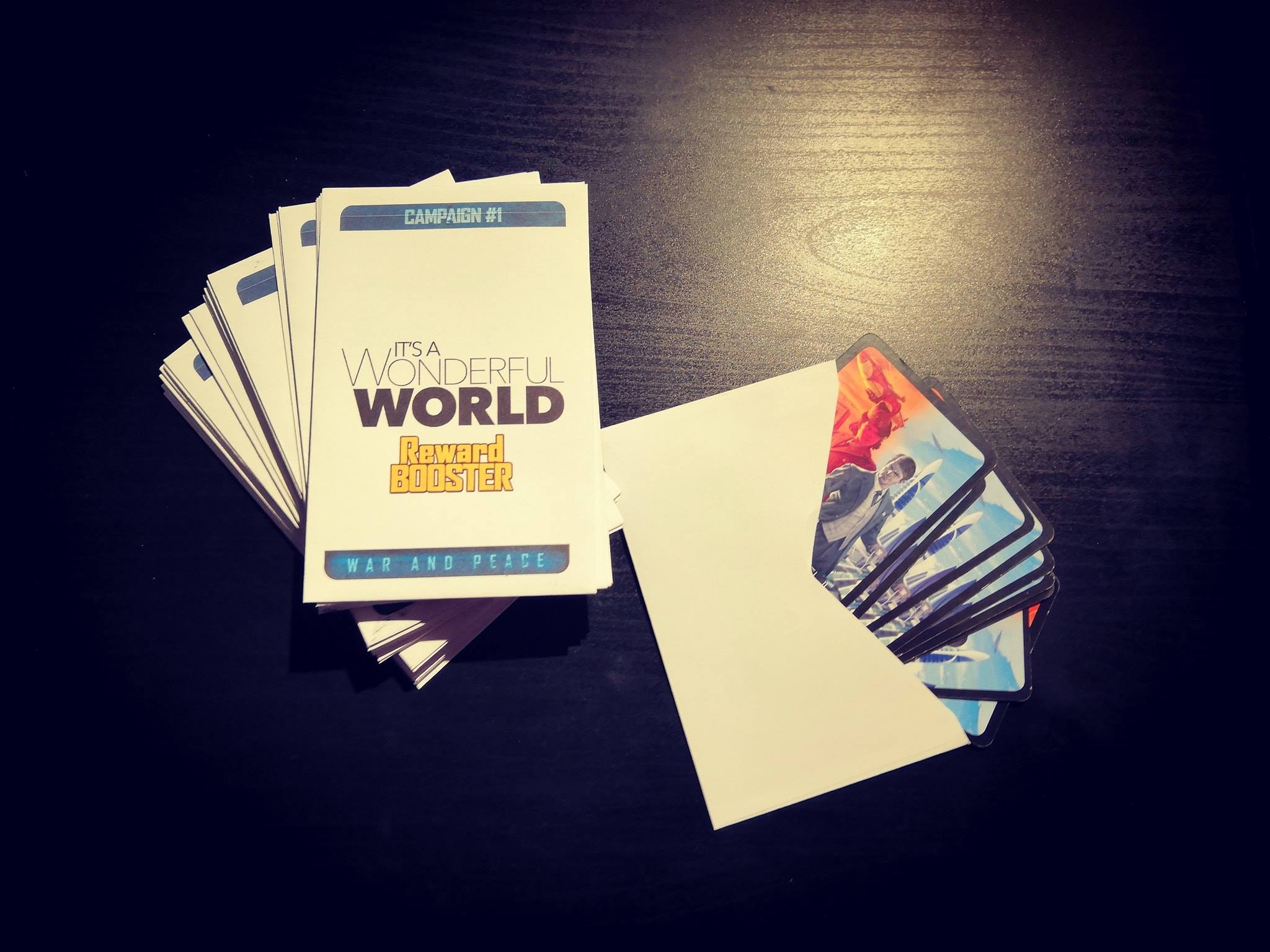 Here, the prototype of the Heritage packs we sent to our Ambassadors (Homemade for the moment ^^)

This booster pack is now playable with the base game in the classic mode. That’s like a mini-expansion. You can add it, remove it, and also rewind your Campaign and play it again.

During the Kickstarter there will be a pledge including 2 Campaigns in addition to the base game.*
The first Campaign called « War and Peace », that will be sent as a prototype to all our Ambassadors (so that they can play and review it for you), is a first approach to the Campaign mode. It introduces the mechanisms and is quite simple to play in order to progressively discover this mode.

The second Campaign called «Leisure and Decline» is more ambitious. We advise to play this Campaign after the first one. It brings a lot of new things and will then enhance your base game with not less than 45 cards. It also introduces a new Resource, “Culture”, which works differently.
The individual and collective decisions you’ll made during this campaign will have an impact on the kind of cards you’ll get in your Heritage Booster.

These two Campaigns will also be available in retail stores (No Ks exclusive) if the game is successful.
It would have been a pity not to offer this mode to those who missed the KS.
The backers will have many Stretch Goals, but also a significant discount on the retail price. They will also receive the 2 Campaigns together with the base box in one go, when the retail stores Campaign packs will only be released some months after the release of the base game.

The Kickstarter will be launched(with many surprises)on the 14th of May 2019 and should be delivered and hit retail between late 2019 and early 2020.
In the meantime, these are some Project and Vehicle cards illustrated by Anthony Wolff.

Thanks for reading!
Benoit

*I used to announce 3 Campaigns but the third one is not over yet. I don’t want to sell on KS a Campaign that is not fully developed. That’s why we’ll keep the third one for a retail release later on, instead of selling it before it’s finished.

It’s a Wonderful World – Campaign Mode
We use cookies on our website to give you the most relevant experience by remembering your preferences and repeat visits. By clicking “Accept All”, you consent to the use of ALL the cookies. However, you may visit "Cookie Settings" to provide a controlled consent.
Cookie SettingsAccept All
Manage consent